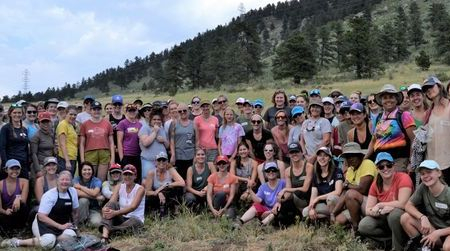 In the 85-degree heat of a sunny July morning, a determined group of more than 80 women carved 1,900 feet of trail out of the side of a mountain.

Volunteers for Outdoor Colorado (VOC) organized the event, assembling the crowd at 7 am on Floyd Hill Open Space in Clear Creek County. Early morning grogginess quickly evaporated over coffee and bagels as mothers and daughters, recent college graduates, ex-professional athletes, long distance hikers and office workers who love the outdoors – all united as volunteers, eager to build a trail.

Ann Baker-Easley, Executive Director of VOC kicked off the day’s events welcoming the crowd and describing the scope of the task at hand. The all women volunteer efforts would contribute to the completion of a trail system that will eventually connect the plains east of Denver to the mountain peaks of the west.

Volunteers were separated into teams of 7 to 12 and introduced to their crew leaders – inspiring women with backgrounds in trail building and the outdoors. They explained to the group the tools they would use – intimidating, heavy, tall and unfamiliar implements. Crew leaders led their teams through scrub and rocks along a line of flags that marked the future trail. Soon the masses of volunteers set to work chopping, sawing, digging, and leveling. By lunchtime, the first half of this difficult flag line had become a beautiful, level, 2-foot-wide trail.

In the afternoon as the group progressed to a section along the ridge, the terrain got rockier and the trail building was harder. One group following their flag markers came upon a large, seemingly unmovable rock. They avoided it, waiting to ask crew leader Kelly if they could redirect the trail around it. When she arrived, the question was answered with a smile and confidence, “Oh that rock? No problem. We can definitely move it.” As the sun hid behind gathering thunderclouds, the women excavated around the boulder, and with four people, some armfuls of smaller rocks, and a rock bar, they eventually heaved the enormous obstacle out of the trail and rolled it farther down the hill. High fives abounded and the group was re-energized to finish construction on their section. At 3 pm, covered in dirt and some scratches, tired volunteers began their trek back down the mountain enjoying a short hike on the newly constructed trail. The day had been a rewarding experience and the women felt inspired to be leaders in the outdoors, proud of the welcoming trail they’d carved up a steep ridge on Floyd Hill Open Space.

MALT is grateful for a partnership with Volunteers for Outdoor Colorado, and the chance for a group of determined women to gather, build trail, share stories and provide future opportunities for people to experience the outdoors. Together we are saving the land, and leaving a legacy.