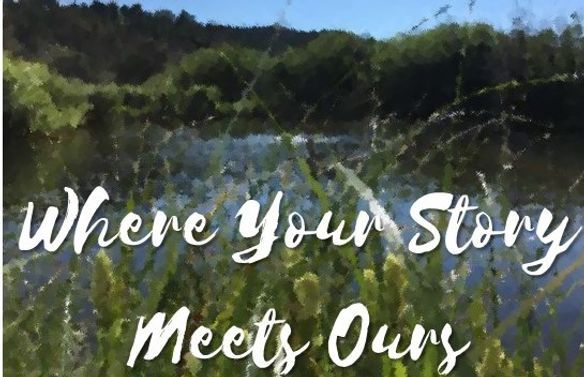 It’s Valentine’s Day, and love is in the air in Evergreen, Colorado!
Les Sweeney recalls the day nearly 30 years ago he met Sarah Ewy in Alexandria, Virginia, a striking brunette who happened to be wearing a chewed up shoe. Sarah laughs, saying “I had a nice pair of Topsiders and a chocolate Labrador puppy!”

Les was a young University of Virginia college graduate embarking on his adult working life, who was lucky enough to meet the future love of his life his first day of his first “adult” job. Sarah, who grew up in Evergreen, was a recent Eastern Kentucky University graduate, stellar volleyball player and graphic designer, also working at the Club Managers Association of America.

It wasn’t long before Les and Sarah fell in love, and in 1992 they got married in Evergreen and began their life’s journey together. After living and working in Virginia for a few more years the young family, along with 6-month old boy Casey in tow, moved to Evergreen to care for Sarah’s mother Betsy. With no specific plan other than “figuring it out when we get there,” Les and Sarah worked temp jobs that first summer, including parking cars for a casino in Black Hawk, to make ends meet. Sarah applied for a graphic designer job with a local company, Associated Bodywork and Massage Professionals (ABMP). During her interview Sarah mentioned her husband’s career in Alexandria, and the company ended up interviewing Les as well. As luck would have it, both Sarah and Les were hired and once again found themselves working together. Life continued to march on for the Sweeneys, adding two more boys, Joe and Peter, to their family. Once they were outnumbered, Sarah left her job to be a full time mom to their three young children, while also caregiving for family members over the years, and coaching volleyball at Evergreen High School. Sarah’s generous nature led her to a class in Social Entrepreneurship while pursuing her MBA from the University of Colorado at Denver in 2013. Les’s career continued to flourish, now in his 25th year at ABMP and its CEO.

Les and Sarah feel blessed to live in a beautiful Colorado community, surrounded by family, friends and an abundance of worthy causes to support. The Sweeneys have caring hearts, and they raised their boys to embrace a spirit of giving. In 2014, they created The Sweeneys Share the Love Foundation, a 501c3 family foundation that “strives to help improve the human condition and our planet by supporting organizations, families, communities and the environment.” Les and Sarah established the foundation to raise awareness for good causes, to be able to donate to other 501c3 charities and to create something that would involve the kids. Les says, “The thing we wanted to do was pay it back and pay it forward from our own good fortune. We want to share that with others, and instill in our kids that giving is really the best gift you can ever get.” Through The Sweeneys Share the Love Foundation, Les, Sarah and the boys created the “Boo Bash,” an annual fundraising gathering featuring a lively Halloween costume party, large silent auction and for a few years, live music performed by Les’s band from his college days, “The Traveling Pillsburys.” Proceeds from the Boo Bash for the past five years have supported numerous charities including Mountain Area Land Trust, EChO, Mountain Backpacks, Evergreen Animal Protective League, EPRD’s Inspire program, Bayaud Enterprises, Project Inti, Mount Evans Home Health Care & Hospice and others. Sarah is modest about her fundraising efforts but Les insists she is the driving force behind their foundation’s success. Les and Sarah appreciate the importance of MALT’s mission. Sarah shares that she has seen a lot of changes in Evergreen since she arrived here as a fifth grader in the 1970s. “I can remember my mom talking about ‘Means Meadow’ long before it became MALT’s Noble Meadow. There was a Texaco gas station and a grocery store downtown. And it was boring! We used to call Evergreen ‘Never Green’ and ‘Ever Boring’.” Sarah continues, “Now Buffalo Park and Alderfer are packed on the weekends, and it almost seems like we are running out of outdoor spaces…but then I think ‘Why not?’ – what’s not to like? We have such a gift living here.” Les adds, “Thanks to MALT our beautiful open spaces will never change.”

Sarah says, “It’s not just ice skating on the lake or the hiking, it’s looking out my car window and seeing the mountains and the open spaces. When our boys ran cross country at Evergreen High School it was so special for them to be able to use the trails for practice. These are our sacred places and we understand that conservation has been a huge part in shaping our community. We’ve been fortunate, and now we want to do our part.”

Les shares, “We love MALT’s mission and what you do…it does a great job of being present in the community. We are spoiled having so much open space at our disposal. Evergreen was always home for Sarah. Now it’s our family’s home, and it brings us so much joy.” Sarah adds, “We have such a gift all around us living here.”

Les, Sarah, Casey, Joe and Peter Sweeney exemplify compassion, the spirit of giving back to their community and love of the land. The Sweeneys share MALT’s vision – Together we are saving the land and leaving a legacy.