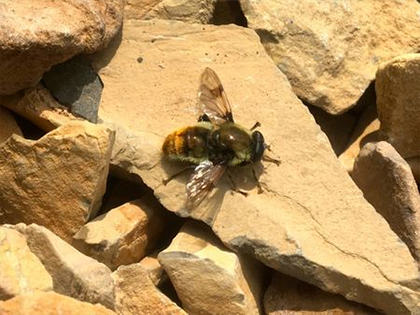 Austin Lynn is passionate about dandelions.

His enthusiasm for the delicate and often misunderstood species started when he was a kid. Austin grew up in Missouri and spent many summer family vacations visiting Rocky Mountain National Park where he fell in love with hiking breathtaking high alpine meadows and snowy mountains.

After graduating from Northwest Missouri State University with a degree in Biology, Austin begin his pursuit of a Doctoral Degree from the University of Missouri-Columbia. Dr. Candi Galen, a longtime MALT supporter, is Austin’s advisor and mentor.

Dr. Galen introduced Austin to the Pennsylvania Mountain Natural Area near Fairplay, Colorado in 2014. She and over 100 other scientists have been conducting research in this high alpine setting continuously since the 1970s. Sitting at about 12,000 feet the region is known for its pristine natural resources and unique biodiversity, including ancient 2,000 year-old reproducing Bristlecone pines and a variety of native and exotic dandelion species.

It was on MALT’s property on the Pennsylvania Mountain Natural Area that Austin fell in love with dandelion research. Every summer for the past six years Austin has returned to Fairplay. He is fascinated with the high alpine setting and its impacts on dandelion reproduction systems, pollen, the effects of “exotic” dandelions on native species and implications for climate change.

As a MALT Research Intern, Austin has led many tours on Pennsylvania Mountain for MALT supporters. He loves sharing his findings, and his excitement about the research is contagious.

Austin’s interest in “all things dandelion” even led him to conduct a study on their edibility by comparing the taste of exotics (non-native) to native species. Austin enjoys the flavor of dandelion greens saying, “I like to eat them as a raw salad green, but they can be cooked for eating as well. The leaves are good young, but when they get larger they get bitter and thus are better cooked.”
Austin collected seeds, grew dandelion varieties back home in Missouri and spent weekends at the local farmers market encouraging visitors to participate in taste tests. While Austin definitely prefers the leafy greens of the native species, he concluded that overall his taste testers couldn’t tell any difference between the varieties.

Much of the work and research Austin conducted was a solitary affair as he would walk for miles in undisturbed places, mapping and identifying dandelions – even discovering an unknown tiny dwarf species. Austin shares, “I love hiking up there, and finding things that people would never see. It’s hard to describe the beauty about Pennsylvania Mountain. I like the green fields and forests at home in Missouri, but I really love the mountains and alpine wildflowers.”
Not surprising, research at 12,000 feet has its challenges. Austin describes that the work is often physically arduous involving long steep walks with lots of heavy gear, and mentally exhausting with hours of tedious and painstaking work hand pollinating tiny little dandelion threads. Despite these difficulties he wouldn’t trade the opportunities he’s had and the friends and colleagues he’s met along the way.

Austin defended his doctoral dissertation, “Sexual and natural selection on pollen morphology in Taraxacum” in February of 2020 and is now officially enjoys the title of Dr. Austin Lynn. He is currently looking for post-doctoral research opportunities focusing on pollination and genetics and is interested in continuing his research on native North American dandelions.

MALT is fortunate to know Dr. Lynn, his continued invaluable contributions to the world of science and his research around all things dandelion.

Together we’re saving the land and leaving a legacy.